GPS waypoints (also called POIs) for use with Canadian Rockies Geology Road Tours, instructions for preparing Ben’s rock-testing acid, and updates and corrections to the book

Feel free to copy or download the information below.

These are the latest waypoints/POIs, with all corrections and updates included. One of the files also includes the tracks I recorded on my GPS unit as I followed the various highways. These tracks are generally truer than the highway alignments given on the current federally issued topographic maps.

You have four choices in downloading the waypoints:

If you have Garmin’s “BaseCamp” or “MapSource” program on your computer, and a compatible GPS receiver with download capability, click here.

After downloading the file and saving it, run BaseCamp or MapSource and open the file. The waypoints and tracks should be displayed. Connect your GPS receiver and download the waypoints and tracks to it by clicking on the program’s download icon and following the directions. Save the file before closing the program, in case you want to use it again.

Some of Garmin’s automotive GPS units can receive waypoints as “POI”s, meaning “points of interest.” Garmin provides a program called “POI Loader” for converting GDP files to POI data and loading it into the auto unit. Information at www.garmin.com. (Click on Support, Updates & Downloads, and Mapping Programs to locate the free download.)

If you have some other GPS program on your computer, and it cannot open the GDB file above, click here.

After downloading the file and saving it, run your GPS program and open the file. This format is GPX, used for the exchange of GPS data among various programs. GPX files can include tracks, but the file I have provided here does not, because tracks may cause problems on devices that do not use BaseCamp or MapSource. If your program can open this file, you may be able to download it to your GPS receiver. If this works, save the file before closing the program, in case you want to use it again.

If your GPS program will not read the GDB or GPX files, you may wish to visit www.gpsbabel.org and purchase a copy of GPSBabel. This inexpensive shareware program, which I have not tried but which has been widely acclaimed, is able to convert many GPS data formats to one another.

Those of you with TomTom automotive GPS units might like to try downloading the shareware program PoiEdit, which can convert GPX files to the OV2 files that many TomTom receivers use. For your convenience, I have done this conversion for the latest waypoints. Download it by clicking here.

If none of the methods above works, you still have one more choice. Click here.

After opening the file, save it to your computer. This is a TXT file, plain text. If you are running Windows, double-clicking on the file will open it in the Notepad program. The latitude/longitude coordinates of each waypoint will be displayed, along with a lot of other info. See if your GPS program — or the receiver itself — will allow you to manually enter the waypoint number and its lat/long coordinates, which are all you need. If so, you can manually enter the waypoints/POIs along any of the tours in the book.

To download my instructions for mixing up a dilute solution of hydrochloric acid for testing rock to see whether it contains the minerals calcite or dolomite, click here.

In December 2009, the second printing of Canadian Rockies Geology Road Tours became available, incorporating corrections to the first printing (2008). Still, some errors and unclear statements sneaked through into the new printing. You may wish to pencil in the following updates.

Page 48, first paragraph under “Rocky Mountain Trench,” last line, change “visible in photos of the Earth taken from the moon” to “easily visible from space.”

After many years of passing along a story that one of the Apollo astronauts radioed mission control while in lunar orbit to ask about a straight line in northwestern North America, I chanced to view the Apollo photos of the Earth as seen from the Moon. The Rocky Mountain Trench was not discernible in them.

I contacted NASA. William P. Barry, NASA’s chief historian, checked the mission transcripts himself, then had them checked very carefully again by one of his staff. As he told me by e-mail on 30 Jan 2014, there is “nothing remotely like a reference to a Rocky Mountain Trench” anywhere in the transcripts.

The Rocky Mountain Trench can certainly be seen from space. I could pick it out in images taken from 1.5 million kilometres away by NASA’s DISCOVR satellite. But no astronaut has reported seeing it from the Moon.

Page 100, in the illustration at the bottom of the page, the annotation “Grotto Mountain 2706 m” should be moved 1.5 cm to the right, so it is above the true summit of the mountain.

Page 118, in the photo of the Three Sisters, the elevation of the highest, rightmost summit should be 2936 m.

Page 119, in the illustration of Mt. Rundle, the summit elevation should be 2949 m. The same error occurs in the photo of Mt. Rundle on page 127.

Page 155, with thanks to Ray Price, of Queen’s University. Re the dykes, Ray doubts that these are actually made of carbonatite, but he is unsure of the exact rock type. Can anyone help nail this down? If you are that person, please e-mail me at ben@bengadd.com.

Also on this page, in the same paragraph as the one about the dykes, the phrase “on the trailing edge of the moving continent” is technically correct — the motion of the continent was relatively eastward (southeastward at the time, when the continent was turned about 90 degrees clockwise from its present orientation), so the western edge was the trailing edge — but the edge was at a subduction zone (see the footnote on page 73), which was more of a leading-edge, active-margin situation than a trailing-edge, passive-margin situation.

Page 160 and 161, change all occurrences of  “tufa” to “travertine,” a more accurate term for this kind of deposit.

Mount Baldy has been the official, gazetted name for this peak since 1984. The name was adopted by the Geographic Names Board of Canada despite (a) not following its own rule that “Mount” is reserved for peaks named after people, and (b) despite “Baldy” being such a mountain-name cliché. Until I checked the official-names website (https://www.nrcan.gc.ca/earth-sciences/geography/place-names/search/9170) I could not believe that this was actually the correct name.

But wait, there’s more. The name I knew the mountain by, “Barrier,” was not just a mistake on my part. It was actually an older unofficial name. It could not be applied officially for what became Mt. Baldy because it had already been applied officially in 1956 to a peak 82 km farther north (Barrier Mountain). Okay, let’s not use the same name for two different mountains.  But “Barrier” also wound up being adopted in the same year, 1956, for the name of the reservoir at the foot of what was then called “Barrier Mountain” informally and is now formally Mt. Baldy.

Not only that, there’s a summit in the foothills officially named Old Baldy Mountain in 1941 that’s 42 km northeast of, get this, Barrier Mountain!

Thus has confusion been sewn. It will continue to be reaped.

Page 220, in the illustration of the triangle zone, the photo is not properly aligned with the diagram. When I took the photo I thought that the centre of the triangle zone lay along the valley of Nelson Creek and Callum Creek (low area in the photo), and that this view showed the triangle zone perfectly.  But in fact the rock in the first two ridges to the right of the valley dips eastward, not westward. Those ridges are actually still in the eastern part of the zone. The third ridge right of the valley is underlain by southwest-dipping rock, so it’s in the western part of the zone. If the photo were shifted about 4 cm left it would better approximate the true position of the zone.

Page 248, second paragraph, my assumption that Pierre Jean de Smet was writing about what we now know as the Kootenay Group was incorrect. A close reading of de Smet’s account of his 1845 travels revealed that he did not follow the Flathead River into the Rockies. Rather, he was moving along the Kootenay River in the Rocky Mountain Trench, where the Kootenay Group does not outcrop. He may actually have been writing about coaly beds in some other rock unit exposed in the Rocky Mountain Trench.

Still, de Smet’s travelogue, published in 1847, does represent the earliest descriptions I could find of rocks and minerals in the Canadian Rockies. If a reader knows of anything earlier, please contact me about it. The e-mail address is ben@bengadd.com.

Page 257, end of the second paragraph. Ray Price has pointed out that big normal faults are not “unknown in the eastern front ranges,” at least not south of the Bow River. The Erickson Fault, found along Hwy 3 at waypoint CP 29, is such a fault, and it is found only 12.7 km west of the mountain front, definitely in the eastern front ranges. I should have used “uncommon” (as I did on page 262) instead of “unknown.”

Page 258, fourth paragraph. Referring to Montania as “an island” may give the wrong impression. Ray Price points out that this region of emergent land reached at least as far west as Chewelah, in northeastern Washington. The boundaries of Montania have not been precisely determined. This landmass may have been part of the ancient North American craton. 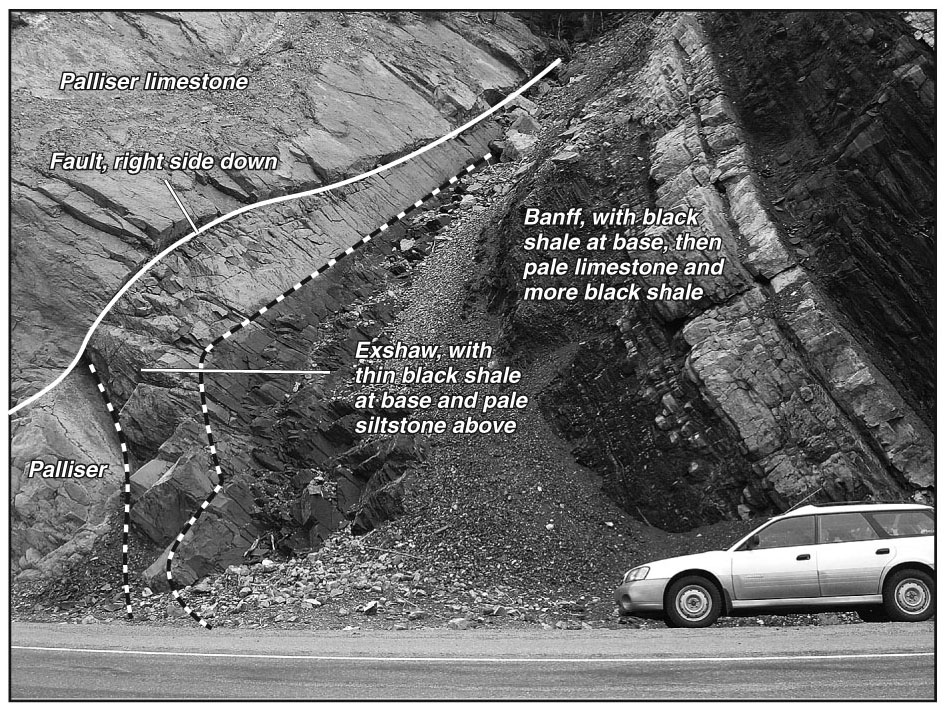 Page 307, in the photo, the elevation given for the SE summit of the Kaufmann Peaks is incorrect. It should be 3109 m. (3094 m is the summit elevation of the NE peak, mostly hidden behind the SE peak in this view.) Thanks to Graeme Pole for spotting this error and the next one.

Page 335, second paragraph, phrase in the third line “For more about the Exshaw.” should be removed.

Page 345, as of 2013 the Kitchener Slide Viewpoint has been taken over by Brewster Travel Canada and turned into a “skywalk,” meaning a walkway with a transparent floor cantilevered out over a drop. The viewpoint is no longer a public pull-off open to anyone at no charge. One cannot simply stop there and view the geology. One must either pay a fee to the corporation and board a shuttle bus at Icefield Centre, or park a kilometre north at Tangle Falls and walk back up the highway (or along a trail) to a much-restricted free-viewing area.

Page 404, in the last paragraph, Pocahontas did not marry John Smith. She married a colonist named John Rolfe. The story that she saved Capt. Smith from execution by her tribespeople is likely false.

Page 499, beginning of the third paragraph, “kilometre 227” should be “kilometre 277.” Thanks to Aaron Springer.

Page 550, in the correlation chart, move the 488 Ma line up a half-centimetre or so, making the Survey Peak Formation late Cambrian and early Ordovician.

Page 559, the website for freely downloading GSC maps has changed, as have the instructions for using it. Here are the new instructions.