As you may know, an author cannot catch the booboos in his own writing that a good editor can. Alas, this book never got its final edit by someone other than me (long story). The mistakes and typographical errors noted below will be corrected in the next version, along with minor typos not worth mentioning here. For now you may wish to mark the changes below into your copy.

Copyright page (back of the title page), after “Lucky thing the raven was home that day,” insert “Added image from a photo by Barry Giles.”

Page 96, not a correction but an addition. In 2018, after An Orogenous Life was published, my boyhood friend Ted Birkedal sent me a number of photos taken with his small box camera in the spring of 1961 when he, Steve Hallisy, Don Black and I were camping in the locality of Jones Park, a tiny abandoned resort area accessible by trail in the mountains just west of Colorado Springs, Colorado. Here are two of these images. I hope to include them in a future edition of the book. Thank you, Ted!

L to R Steve Hallisy, Ted Birkedal and Ben Gadd at the ruin of the largest cabin built at Jones Park in the 1880s by Colorado College professor Frank Loud. He had named it “Chipmunk Lodge.” Photo by Don Black, April 1961. The dog is Don’s boxer. 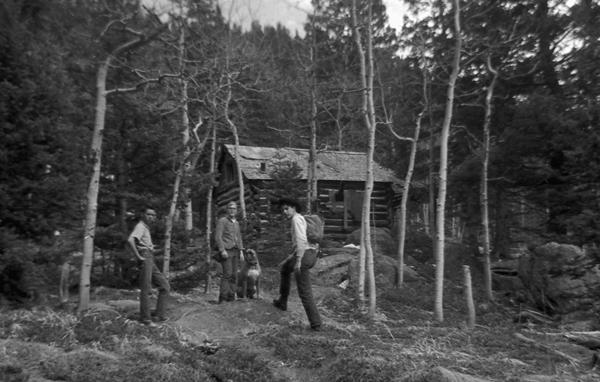 L to R Steve Hallisy, Ted Birkedal and Don Black approaching the smaller of the two Loud’s cabins at Jones Park. I could find no name for this cabin, but after we four boys made some repairs we applied Don Black’s name for it, “Happy Aspens.” Photo by Ben Gadd, April 1961.

Page 125, in the first paragraph remove reference to Martin Luther King Jr. I had always thought that King was a key figure in the Congress of Racial Equality, but he wasn’t. King’s organization was the Southern Christian Leadership Conference. The SCLC, CORE and all the other major civil-rights organizations in the U.S. cooperated during the Chicago protests.

Page 196, fourth paragraph, change “three territories” to just “territories.” (There were only two in 1968, three when Nunavut was declared later on.)

Page 235, seventh paragraph, I don’t have Einstein’s contribution to radiometric dating quite right. Change the second sentence to “His special theory of relativity gave us that famous equation e=mc2, which showed how radioactive decay changed the mass of energy-emitting elements such as uranium.”

Page 251, first paragraph, I should have mentioned that my study of streams in the foothills and front ranges had suggested that there might be tectonic activity in the foothills, i.e. that the Rockies might still be growing. This would have been a significant discovery, updating the wisdom, still current, that mountain-building in the region was no longer occurring. Doing the work needed to either confirm or reject my hypothesis would have earned me an M.Sc. or perhaps even a Ph.D., but I didn’t go on to graduate school, and to this day no one else has taken on the project.

Page 304, fourth paragraph, remove sentence, “Located in the wealthy Broadmoor area, CSS was way ahead of the public system in helping students to overcome learning disabilities.”

Page 314, I recount trying out cross-country skis in Crested Butte, Colorado, before the downhill ski area near the town had opened. Actually the area had been operating since 1961, but it was so small that the impact on the town was minor and the evenings there were quiet.

Page 352, third paragraph, change “an Earth-science degree” to “a degree in geology.” Elise Maltin, who is pictured on that page, had a degree in geography, which is one of the Earth sciences.

Page 359, under the song title, change the paragraph in italics to “Music and lyrics ©1983, 2014 by Ben Gadd, with apologies to Chubby Checker. To hear this, go to bengadd.com and click on Downloads, then scroll down to Music.”

Page 396, remove mention of the Bankhead book, which was already written by the time the Handbook came out but was published later. Somehow I forgot that, duh.

Page 485, not a correction, but I think it’s worth mentioning that in 2017 “The Gathering Place” was discovered by Gilles Mossière, a professor of French at Mount Royal University in Calgary. He liked the story well enough to translate it and submit it to the CBC in Montreal, thinking that listeners would enjoy hearing it. On December 21st “The Gathering Place,” renamed “La grande célébration,” which worked better in French, was indeed broadcast. As of June 2019 you could still hear it at http://ici.radio-canada.ca/premiere/emissions/le-cafe-show/segments/prestation/52206/conte-grande-celebration-ben-gadd-gilles-mossiere

Page 519, third paragraph from the bottom, change “Muztag” to “Muztagh.”

Page 594,  beginning of the sixth paragraph, remove “He never did tell me his name.” It’s redundant.

Page 599, first paragraph, change last sentence to, “You can read it at bengadd.com. Click on Downloads and scroll down to Essays.”

Here are a few changes to the index: